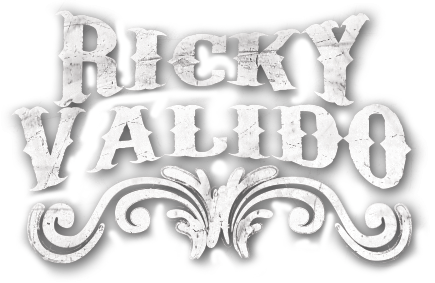 An endless passion for outlaw music, for stories,
for people, for life.

Ricky Valido is fast growing his popularity as a unique country music songwriter and performer. With Cuban American roots, Ricky reigns from Hialeah Florida, where his great grandparents settled after arriving from Cuba in the 1960s. Racking up an impressive 200 performances a year, appearing on stages in the Southeast 3-5 times a week, Ricky’s fan base is loyal and growing, with his popularity reaching internationally and spreading to neighboring states in the USA. Ricky’s high-energy shows draw audiences into a rattling and foot stomping hillbilly experience.

A dynamic performer with a distinct and captivating vocal style, Ricky draws on his interesting personal history in his songwriting. His ability to connect with his audience, both on and off stage, is the driving force behind the growing demand for his music. With a timeless sound than transcends genres and generations alike, Ricky’s relationship with his art is pure, honest and genuine. With a true appreciation for the people who come out to enjoy his shows, Ricky is a fully independent artist with reverence for a life spent working hard for a living. With a sincere work ethic and gratitude for his community, he frequently donates his time to events and fundraisers for causes he believes in.

Ricky began learning guitar aged 8, after being gifted one from his great grandmother and he started writing songs and poetry in his early teens. His creative pursuits then developed into performing original music with his band, The Hialeah Hillbillies, names after Ricky’s birthplace in Florida. The Hialeah Hillbillies are now a permanent fixture as Ricky’s backing band.

Ricky’s fan base is growing rapidly, both online and offline, with audiences readily connecting to the man behind the music. He’s an artist who embodies family values, a genuine love for his community, a passion for raising awareness for the protection of nature and wildlife, while also being a talented musician, producer, businessman and creative soul.